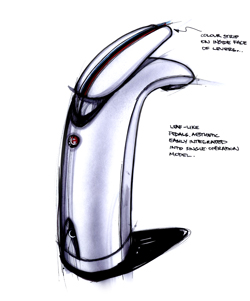 Billi Systems is an Australian based organisation that makes appliances including tapware, water coolers, filters and water filtration units.

Bayly were asked to update Billi Systems long-standing flagship appliance, the Trio – a dual temperature water dispenser installed in domestic and commercial environments. The market leading system had enjoyed a long run, but was in need of an aesthetic and technical evolution.

The new Billi Quadra is the ultimate drinking water appliance providing the convenience of an instant supply of refreshing and invigorating filtered water, both boiling and chilled. The new Quadra - conssts of two main subsystems: 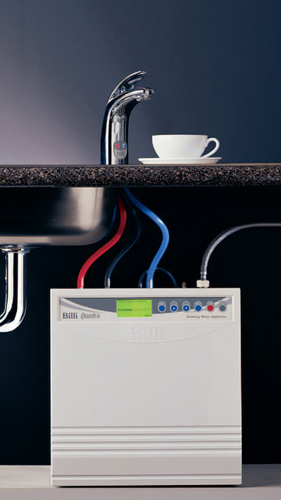 The under bench unit - essentially the nerve centre where the water is taken in, dual-stage filtered (sediment and chemical), and heated and/or chilled, (all whilst being electronically monitored) and,

The dispenser – a bench mounted tap where most of the user interaction occurs.

From a styling standpoint, the Billi team called for the dispenser to be softer and more contemporary in appearance. This was achieved through conceptuai iterations, form-studies, and models. A key feature of the Billi Quadra is the prominent levers that expand on Billi’s proven ergonomic interface. The shape and size of the levers promote intuitive operation, and also comply with Australian Standards for ease of use for persons with a disability. User safety has also been considered by electronically controlling the flow. The water is slowed momentarily as it first exits the dispenser, eliminating any splashing that may occur. 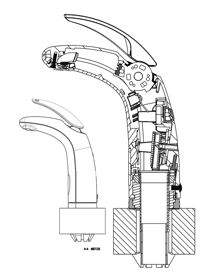 On the underbench unit, a back-lit LCD display panel constantly advises the user as to the Quadra’s operation. Programming is simple and important usage data is easily accessed. User instructions such as ‘How to change filters’ are shown as step-by-step moving graphic images on the display.

Beyond user interaction, several technical enhancements were made to improve the assembly, function, and installation/service of the system. As a first step, Bayly examined the assembly of the Trio to determine which components and sub-assemblies could be rationalised to reduce/ease labour. Drawing on Billi’s knowledge,materials were selected for their ability to not only avoid contamination, but also not affect the water’s taste. The components that insulate the hot and cold tanks are moulded in high performance expanded Polypropylene, providing a high thermal R-value rating,significantly reducing temperature change and thereby improving the Quadra’s energy efficiency.

Setting new standards of high energy efficiency, space efficiency and environmental sensitivity, the Quadra design incorporates the growing awareness of the responsibilities of Ecologically Sustainable Development (ESD) initiatives. Billi’s patented thermodynamic Heat-Cell is a technological breakthrough in energy efficient appliance design. The unique Quadra Heat-Cell uses state of the art technology, allowing an extraordinary amount of heat to be absorbed and stored in a very small space. Heat energy generated during the chilling cycle is wasted to atmosphere in other brand units. The Quadra Heat-Cell recovers this waste heat energy which is then used to preheat the boiling waste,saving valuable power. 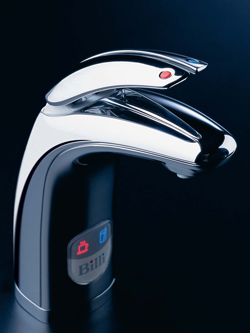 The new Billi Quadra Dual Temperature Water Dispenser is now available on the market and will take over the Trio as Billi’s new flagship appliance for domestic and commercial environments. In addition, the appliance is now more environmentally friendly, requires less parts and maintenance and is easier to service. Suggested retail price is $3,500 AUD.

The project included research and the complete development of conceptual solutions, sub-system configurations and interfaces, above and below bench units, detailed component and assembly specification and 3D CAD, tooling management/ liaison, functional and aesthetic prototyping and testing. Several technical enhancements were made to improve the assembly, function, and installation/service of the system. These sub-systems were prototyped at various stages of development to continually verify and evaluate their functionality.