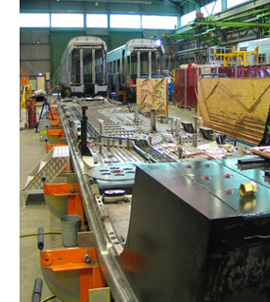 Bombardier Transportation is the largest train manufacturer in the world. Their manufacturing site in Dandenong Victoria has been refurbished to supply and support 38 VLOCITY trains to the Victorian Government as a key part of the governments’ Regional Fast Rail project. The VLOCITY train is a two carriage symmetrical train that will travel up to 160 km/h. This is 30 km/h faster than the existing trains. The trains will service the Melbourne to Ballarat, Melbourne to Geelong and the Melbourne to Bendigo lines from 2005 and beyond.

The VLOCITY train carriage consists of a number of main assemblies constructed from stainless steel frameworks which are assembled and welded together. Bombardier sought outside assistance for the design, manufacture and supply of the jigs and fixtures used to position and retain this framework during assembly.

They chose Bayly for a number of reasons: at the time, the Bayly team already processed a strong working knowledge of train manufacture having completed other train based projects in the late 1990’s.  Bayly has a track record of providing solutions conforming to safe work practices and had the skills to provide innovative solutions to enable cost reductions.  Our utilisation of state of the art CAD tools meant we could maintain Bombardiers tight manufacturing tolerances and high production standards. 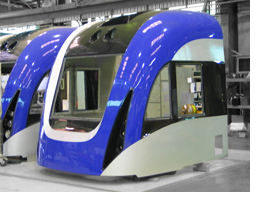 Delivering outcomes on time was integral for successful progression of the VLOCITY train project. Prior to the commencement of design work, Bayly worked with Bombardier to develop the budgets and timelines for the design, manufacture and assembly stages. By developing these guidelines together, Bayly was able to ensure the timescales to manufacture the assembly fixtures met Bombardier’s top level commitments to build the VLOCITY train.

The design stages of the assembly fixtures were technology based. 3D CAD models of the VLOCITY train carriage were imported from Bombardier’s CATIA CAD system into Bayly’s Pro Engineer CAD Tools. The required fixtures were then designed directly onto and around the existing framework. Aiding Bombardiers visualisation of the working concept, this procedure was beneficial in increasing the accuracy and practicality element of the design. The 3D models also enabled Bombardier to see the steps of design for each fixture and helped them visualise the assembly procedure. This process saved Bombardier precious time in determining the handling of each item and the choice of welding equipment.

The key feature of Bayly’s design of the assembly fixtures included a simple, cost effective design that reduced the manufacturing costs as well as the overall manual labour in assembly. The design of the jigs met the tight frame tolerances Bombardier needed for the train carriages. Bombardier’s original requirement was for one welded fixture per subassembly frame. Bayly managed to combine various fixtures into the one fixture which saved over $60,000 in manufacturing and assembly costs as well as overall space in their factory.