Clear communication is the key to being able to work and engage with other people in an effective manner.  This can be conducted through various channels including but not exclusive to conversation, body language, email and documents.  What happens when communication is let down by definition?  That is, what happens when one parties definition of a word or term is different from the others.  This quickly leads to confusion and misinterpretation often resulting in frustration from both sides.  So how do we avoid this?  In this article we look at commonly used terms we come across as Industrial Designers in Melbourne and what they actually mean.

After working in the industry for over a decade one thing has been evident among clients and that is their tendency to define design direction in terms of past, present and future.  So lets take a look at what these are and what they really mean within the Product Design community here in Melbourne.

Retro, as with all of the terms explored here has different meanings in different circles.  For example, retro on the street often refers to old or ‘vintage’ clothes found in Op shops as opposed to current fashion styled in the old era.  In product design retro refers to the contemporary design of a new product taking design cues and inspiration from the early to mid 20th century.  Retro-futurism refers to a design style taken from the visions of people of this time of what the future could be like.

Modern is one of those words that depending on who you are means two almost opposite things.  On one hand modern (or Modernism) refers to the design style and philosophical movement in western society through the late 19th and early 20th centuries.  To many others modern means exactly that, modern, that is the design is reflective of current trends and social influences and is considered new or contemporary.  In the early 21st century modern tends to refer to Minimalist as this has been the dominant style of the recent past.  This is also true in Product Design and has been clearly demonstrated over the past decade by Apple with their highly successful series of product lines which are all clean and simple in design. 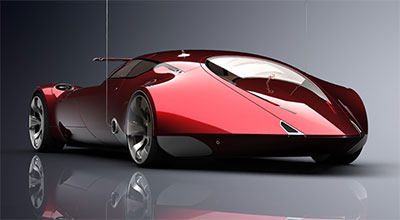 Futuristic by definition is a point in the future that it as yet undefined, making the word itself clear in direct communication.  What is unclear is the meaning.  As the future doesn’t yet exist what is it that defines something as being futuristic?  Purely by definition futuristic is something doesn’t exist and to be defined as such a product must challenge current expectations and norms and provide something inspirational.  But this doesn’t define a style or design direction, just a philosophy by which to base it on.

It is easy to see how a misunderstanding can occur in product definition is to to different peoples understanding of the same word.  The only way in which to avoid this is to clearly define the meaning of the word in the beginning and often the best way this can be done is visually.  This removes any confusion and clearly defines the objective, a picture speaks a thousand words.  If you would like assistance defining your design direction or would just like to talk please contact Mark Bayly or Lee Baker in Melbourne on 0413 9000 or email us at This email address is being protected from spambots. You need JavaScript enabled to view it..

Don't miss out. Sign up for our newsletter now!